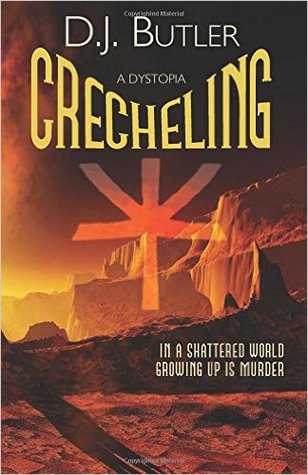 Dave Butler is one of my author heros. LTUE 2014 was my fist year as a writing panelist. If Dave hadn’t encouraged me to get in touch with the organizers of that event, and invited me to join his table of stellar indie authors for that and several subsequent events, I may not have known or engaged in the opportunities to network, sell, and panel that have really bolstered my confidence and grown my audience as an author. He also gave me valuable feedback on my manuscript of Maladaptive Bind before I published the novel edition. Dave is just an all-around awesome guy–and a fabulous salesman to boot. He began as an independently published author, and has recently had a number of his titles picked up by Wordfire Press, including his YA post-apocalyptic thriller Crecheling. I’m very excited for Dave and wish him the best of luck with his new publisher.

I’ve had this book on my physical bookshelf in its indie form for over a year, and decided to pick up Wordfire’s Kindle edition for my phone to read to me at work. I am far past due for reviewing this book, and so excited that I was finally able to read/listen to it.

Crecheling follows the intense story of a young girl named Dyan who must ritualistically kill another “child” or teenager her age named Jak from a lower pastoral class. This boy along with four other teens were deemed too smart for their caste, and therefore too much of a threat to the order of the System. All children raised in upper-class Creches (Creches being groups of children raised together by a “Magistrate” rather than in family units like the lower classes) must join the blood cult of the Urbane class to be inducted into the System–or else become outcasts and outlaws of open rebellion to be “captured or killed” if they refuse. More often, these upper-class people who attempt to flee the System are killed, it seems.

The reward for Dyan and her Crechemates in proving their loyalty to the System through such drastic means is induction into Urbane adulthood and their desired roles in society. (Dyan wants only to be a full-time daycare worker or “Magistrate” at that–an occupation of nurture and compassion rather than brutality). Everything goes wrong, of course when the boys and girls Dyan and her Chrechemates are ordered to kill decide to retaliate–and killing was not at all what she thought would be expected of her.

The central concept I took away from Crehceling was a rather profound exploration of the idea that families are fundamental units of society. In a fictional civilization where families are all but done away, the romantic subplot between Dyan and Jak (as many YA books feature a romantic subplot) results in their beautifully mature resolution to join together as “man and good wife” to create their own family in utter defiance of the System’s grooming. This strikes me as a clever and thought-provoking trope twist. Wrapped up nicely with this progression are other significant revelations about the power of family ties that could not be stifled by the System that come to light toward the end of the book.

The story is bloody with many character-personal casualties (few expendables were slaughtered, which I like). It also features these highly creative “monofilament” whips that can cut a person in half with a single lash. I found these to be the most intriguing–and terrifying–technological features of Butler’s brutal world. As a geologist, I also loved adventuring through the milieu of deserts and canyons scorched by heat.

Butler has created a rich post-apocalyptic world with strong characters. The action-packed plot is full of twists that will keep you on the edge of your seat. If you’re a fan of YA dystopia and post-apocalyptic fiction, put this on your reading list. It is fantastic.