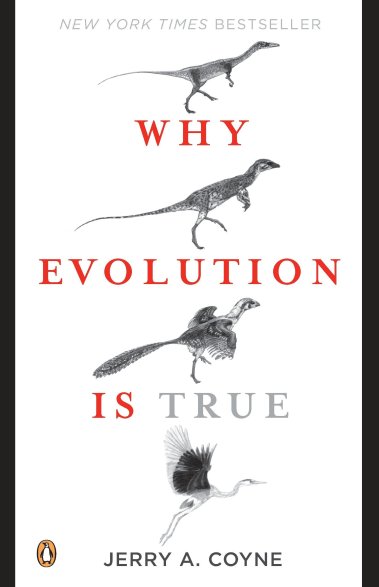 This is a fabulous book, an excellent reference that explains why evolution is a scientific concept and Creationism/Intelligent Design is not.

I found this book particularly helpful in deconstructing the concerns and fears of those who reject evolution, where those fears are coming from, and how offering scientific evidence can sometimes fail to persuade given the context of those fears. As this book discusses, while very few scientists in the world today are pressured to “prove” the existence of the atom or the theory of gravity and reconcile these things with spiritual beliefs, evolution is a different story. Coyne suggests this is because nothing is more personal for us than discussing humanity’s biological (and any other) origins.

I have many thoughts and find it worthwhile to describe how evolution fits in with my own religious beliefs while also touching on the science in this book.

I am a deeply religious person myself, a Mormon, and I’ve always found evolution to be a fascinating, beautiful, and even spiritually enlightening concept as I often feel about many secular subjects that I study. There is something so profound to me in the idea of being physically connected to every other living thing and even to non-living things (“The dust of the [Earth],” if you will). To seeing the Earth and all life thereon as deeply old. That my body looks and functions the way it does because it has a long and intricate history, one shared and echoed in the bodies and personalities of other organisms. The mechanisms by which anything may pass on its physical and behavioral traits to the next generation are so pivotal to the survival, growth, and propagation of perishable life on this planet that even the tiniest, “slimiest” little amoeba has a body and a legacy of reproductive inheritance (a thing Lucifer is never going to take part in, according to LDS theology). To me, I can’t look at the world through an evolutionary lens and not also feel a profound sense of God’s love for His Earth and His children.

It wasn’t until I became a teenager that I discovered others of my own faith struggle to reconcile the concept of evolution with our beliefs. The challenge with presenting the evidence of evolution as a mechanism by which biological life on earth propagates and populations change over time is that many who reject evolution are not actually concerned about whether the science is sound. Rather, the concern is whether their belief in God, or, perhaps more palpably, their sense of human dignity or decency, or even identity, will erode if they accept evolution as true.

Coyne, the author of this book, is, from what I understand, an Atheist, who holds a personal view that science and religion are fundamentally incompatible. While I obviously hold a different point of view, this book comes from an honest place according to this author’s beliefs. He criticizes “seeing” God’s hand in natural processes, specifically to demonstrate that a particular idea called “Special Creation,” which purports specific tenets about how life on earth came to be, is incompatible with the evidence we actually see and can measure in nature.

Special Creation claims that life appeared in all its distinct forms as we presently know them under the influence of processes operating outside of natural laws, that these forms have not changed since their inception, that the earth came about in precisely six twenty-four hour days by strict interpretation of the account in Genesis, and that the complexity of living things could not have been derived from simpler forms. Much of Special Creation derives its view from ancient Greek philosophies that became incorporated into early Christian dogma–though that point isn’t discussed so much in this book.

In order for an explanation to be considered scientific, it must be measurable, experimentally reproducible or observationally evident, and hypothetically disprovable given certain other conditions are met instead. A “theory” in scientific terminology is something that has failed to be disproven on account of a large body of observational and experimental evidence. Like writing out a mathematical proof to show that the number zero exists, saying that God’s power is behind natural processes is, in my opinion, not incorrect, but it is an explanation that, by itself, is not going to demonstrate understanding or help us harness the mechanics of those processes.

I also find that Special Creation, according to the tenets mentioned above as well as other tenets associated with this term, conflicts with my beliefs as a Mormon about the nature of God, the meaning of truth, and the operations of the Creation. Mormons do not believe in Creatio Ex Nihilo (that God created the Earth out of nothing), but rather organized the Earth using material that already existed (Abraham 3: 24), and that even the spirits of living things like ourselves are organized matter (Doctrine and Covenants 131:7-8, Doctrine and Covenants 93:29). We also believe that God is subject to natural laws. For example, miracles “should not be regarded as deviations from the ordinary course of nature so much as manifestations of divine or spiritual power. Some lower law was in each case superseded by the action of a higher” (LDS Bible Dictionary: Miracles). And, rather conspicuously, we believe truth can be found other places besides the Bible alone.

A lot of scriptural language is also symbolic, pertaining to spiritual and virtue-based concepts rather than being mechanical or quantitative descriptions. For example, we have an account of the Creation which substitutes “time” for “day” (Abraham 4:13), and consider that a “day” as written could be symbolic or poetic terminology for different spans or phases in the Creation rather than a literal 24-hour day (there isn’t hard LDS doctrine specifying what a “day” means here either way, except that man’s reckoning and God’s reckoning of time are not always in the same terms).

“This University is committed to search for truth, and teach the truth. All truth is part of the gospel of Jesus Christ. Whether truth comes from a scientific laboratory or by revelation from the Lord, it is compatible. All truth is part of the everlasting gospel. There is no conflict between science and religion. Conflict only arises from an incomplete knowledge of either science or religion, or both.” 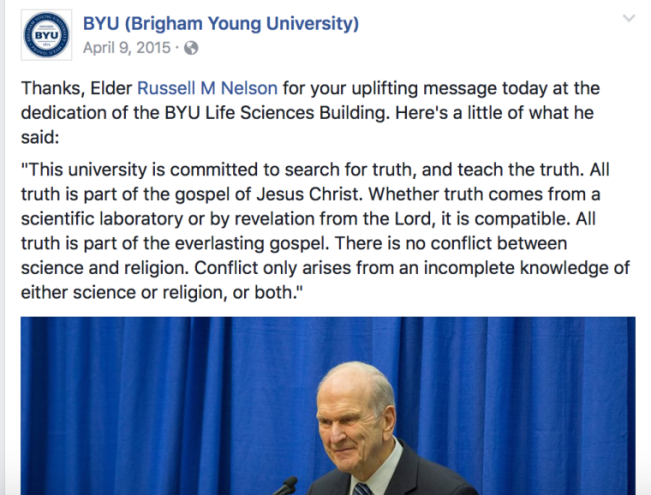 From a religious perspective, I feel comfortable in an idea that my body and my spirit have different origins. The idea that being physically descended from “lesser life forms” is somehow repulsive, and an excuse to be immoral, is counterintuitive to me because of how I see evolution. But it is something that people feel and people fear when they think of this topic. A solid understanding of the science of evolution should not feel degrading. It should be another tool, like other knowledge, like our intuition and common sense, like our beliefs and traditions we’ve inherited, and like the technology we have available in the times in which we live. Something we can use to rise above and overcome all kinds of physical, emotional, environmental, and even moral weaknesses inherent to who and what we are.

A man named Dr. John Hawks, who’s Great Course lecture series I listened to recently (called The Rise of Humans: Great Scientific Debates), suggested that culture and medical technology–human choice–is potentially the biggest evolutionary force on human populations today. I think that’s a powerful statement, one that evokes a deep sense of control as well as responsibility for the environments we tame, for the resources we use and share, and toward ourselves and our fellow men. We possess amazing powers of foresight, social collaboration, cognition, and ingenuity that allow us to learn from the ways of people who have come before us and make conscientious decisions that lead the way for those who come after. The choices we make now have multi-generational consequences on our own species.

Our ability to comprehend and prepare for the future is, I think, a big part of what makes us humans moral creatures. Here, the context of evolution can bolster our appreciation for the rich physical and cultural varieties we perceive in our species, while at the same time bringing the experiences of the human condition we all share in common into sharper focus. All because the “lowly” amoeba, or the moth, or the extinct Neanderthal might also share something in common with our functions. With experimentation and observation, we can discover more about ourselves and gain stronger control over our own destinies than we would have been able to if the earth were barren of all life but our own.

What I love about Why Evolution is True is that it nicely packages many areas of research that confirm biological/Neo-Darwinian evolution: population genetics, the abundant and consistent patterns of the fossil record, paleobiogeography, comparative anatomy, vestigial anatomy, molecular biology, behavioral psychology, and so on. Not only is evolution a real mechanism of nature that is acting on living populations, including our own, right now, the knowledge we gain from it has the power to deepen rather than diminish our understanding of what it means to be human. This book is an excellent resource for discussing the vast scientific evidence that evolution is a fact, and in articulating and addressing common concerns people have with the subject.

To finish up my thoughts, here is a video of Steven L. Peck, Professor of Biology at Brigham Young University and author of A Short Stay in Hell, discussing why evolution and LDS thought in particular are fully compatible: